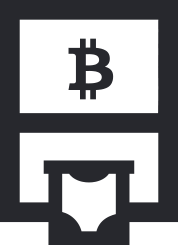 ATM (automated teller machine) is an electronic device that is used by financial services to provide various operations for their customers. The most commonly used ATM transactions are cash deposits and withdrawals, transferring funds and obtaining account information. Some current ATMs are also capable of performing such operations as selling train and lottery tickets, offering an opportunity for charitable donations and retailing concert tickets. The outburst of the popularity of cryptocurrency has also influenced ATMs and led to the development of cryptocurrency ATMs. The most popular of them is, of course, Bitcoin ATMs that allow people to exchange Bitcoin for cash, but one can also find Litecoin and Ethereum ATMs. However, crypto ATMs are not an ATM in the traditional sense, as it is not connected to a bank account, but to the Bitcoin exchange itself.
Scelta dell'Editore
Cointelegraph YouTube Iscriviti
Pubblicità